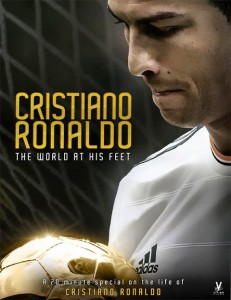 All eyes were on Cristiano Ronaldo on Sunday during the FIFA World Cup match between Portugal and the U.S. — the Real Madrid winger is considered one of the most talented players on the planet.

Delivering a late-in-the-game cross that helped his country’s team salvage a draw and keep alive their hopes of advancing to the next round of the tournament, Ronaldo will soon be in the spotlight again. That’s good news for indie distributor Vision Films, as it’s currently promoting an exclusive Vimeo on-demand release of Cristiano Ronaldo: The World at His Feet, a documentary about the player’s life.

Narrated by actor (pictured above) Benedict Cumberbatch (The Fifth Estate, Sherlock), the doc features appearances by players David Beckham and Lionel Messi, as well as an exclusive interview with Ronaldo.

The movie was only completed about a week before its release last Friday, says Lise Romanoff, Vision Films’ managing Director/CEO worldwide distribution. The distributor chose Vimeo for the exclusive 30-day VOD window in part because the platform was able to release the format in a “record amount of time,” Romanoff says about the rev-share deal she brokered with Sam Toles, VP of content acquisitions & business development at Vimeo.

To help promote the release, Vision Films has hired marketing firm RGM, which has launched a 30-day web campaign to target U.S. audiences who are “most likely to rent and buy the film.” The plan is to leverage World Cup buzz using paid advertising, social media engagement, as well as placements on football fan sites and movie review sites.

Vision films is now also reaching out to marketing firms in Portugal, Spain, Brazil, Germany and France as the film will be available in Portuguese, Spanish, German and French.

Check out the trailer for the doc below: