Meru executive producers Jimmy Chin and Chai Vasarhelyi talk to realscreen about the challenges behind simultaneously filming and climbing one of the world's most challenging peaks in their Sundance audience award-winning doc. 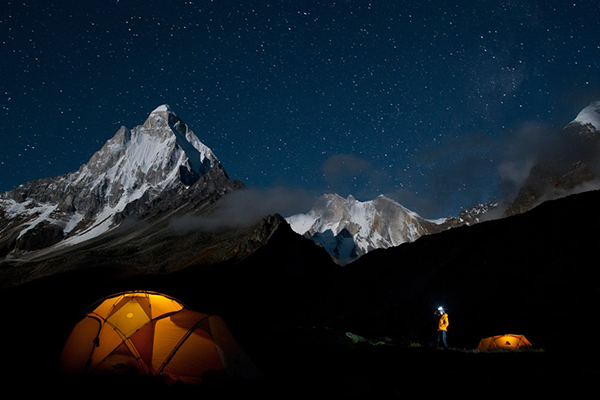 After winning the Audience Award in the U.S. documentary competition at Sundance in January, mountain climbing doc Meru made its way through the festival circuit, racking up awards and recognition while securing TV and theatrical distribution in North America. Here, realscreen explores how the film is looking to challenge the landscape for climbing docs.

Between the peaks of the Greater Himalayan Range in Northern India lies the sleepy Hindu pilgrimage town of Gangotri at the glacier-fed banks of the Bhagirathi River, the birthplace of the sacred Ganges River.

It’s in this mountain chain, nestled in the Garhwal Himalayas, that the North Face Meru Expedition team, comprised of mentor Conrad Anker, mountaineer and National Geographic filmmaker Jimmy Chin (pictured, below) and protégé Renan Ozturk, set out to conquer the arduous Mount Meru ascent that has troubled so many alpinists before them – more than any other range in the 2,400 km Himalayan stretch.

Exec produced by Chin and award-winning documentarian Elizabeth “Chai” Vasarhelyi  (pictured, below), the 90-minute Meru sees the trio battle through previous failures, personal hardships and nature’s elements during two separate ascension attempts in 2008 and 2011 to become the first individuals to reach Mount Meru’s summit, dubbed by the climbing community as the “most technically challenging and perilous peak in the Himalayas.”

It was the first expedition in October 2008 when, after clambering up more than 4,000 feet of technical walls mixed with rock, ice and snow, the trio of alpinists arrived at the mountain’s central peak, standing 21,000 feet high (Mount Everest, by comparison, stands at more than 29,000 feet). This petite crest, otherwise known as the Shark’s Fin with a “smooth, nearly featureless” granite façade, has distressed steadfast climbers for more than three decades. “We’re professional climbers – Meru is extremely technical and you can’t just pay [Sherpas] $75,000 and learn how to climb at a very high level like you can with Everest,” said Jimmy Chin, who also served as the film’s director, in an interview with realscreen.

What was meant to be a seven-day journey had quickly turned into a 20-day trial of endurance as the trio was hampered by a days-long autumn storm that dumped more than 10-feet of snow, effectively suspending them thousands of feet in the air within the confines of their cliff-side portaledge. Weathered and defeated, the team descended, having failed to reach the summit by a mere 328 feet.

They would return three years later.

What separates Meru from many climbing documentaries is the strength of its authenticity. While previous standout mountaineering films such as Kevin McDonald’s Touching the Void or Anthony Geffen‘s The Wildest Dream: Conquest of Everest feature re-enactment sequences to convey various challenges of the climb, Meru relies solely on the raw footage captured at 20,000-plus feet to expose the environment’s extreme conditions.

“In documentary, if you didn’t shoot it then it didn’t happen,” Chai Vasarhelyi explains. “A lot of the scenes that may have transpired that we don’t have footage of, we can’t talk about them in the film. It was an interesting constraint to have, but the strength of this film comes from how visceral, how authentic it is because we shot on the mountain.”

Capturing the team’s two summit attempts on video was something that was never intended for theatrical release, but instead envisioned for personal documentation with the possibility of a future “short edit,” the director said.

The proof is in the video equipment used during the 2008 climb, Chin notes, as the climbing team was only equipped with a Panasonic Lumix point-and-shoot – “I don’t even think it shot high definition video,” he says – and a three-chip Panasonic camera. The crew’s 2011 climb, however, came on the heels of cost-effective DSLRs and armed the National Geographic photographer with a Canon Mark 5D, a Panasonic HDR and a stable of lenses and memory cards.

“After 2011, I started thinking about the different elements we had surrounding the climb and thought it might be an interesting narrative,” explains Chin, who a year later brought a rough edit of the film to the attention of co-executive producer and A Normal Life director Vasarhelyi.

Vasarhelyi noticed early on that the enduring friendships and personal struggles at the core of the story may draw interest from audiences unfamiliar with the climbing world. But how to do so without allowing the climbing to overwhelm a narrative was a constant balancing act riddled with conflicts during the editing process. Solid footing only came, she notes, after conducting an emotional set of interviews with the alpinists in an effort to reveal the mountain’s spiritual toll. Six months prior to the team’s September 2011 return expedition to Meru, Chin and Ozturk (pictured, left) signed on for a film project that would take them to the Teton Range in Jackson Hole, Wyoming. The week-long trip would forever alter Meru’s direction along with the lives of the film’s leading characters, as Ozturk would ultimately fracture his skull and rupture his vertebral artery after tumbling over a cliff while skiing.

“Shooting Renan in the hospital was challenging, but in a way it kind of separated me from what was happening. I was emotionally distraught and felt responsible in a way for what had happened to him,” Chin recalled.

But four days after witnessing Ozturk’s accident, Chin would himself be caught in a thunderous Class IV avalanche that would hurl him 2,000 feet downhill, churning and half-burying him at the top of a debris field.

“That [scene] was very important because it strikes the narrative portion of the film,” said Vasarhelyi, who is now married to Chin and admits to exiting the theater when it’s time for the aforementioned accident. “It gives you an understanding of [the second climb] as a comeback story.”

For Chin, Meru was the culmination of a wealth of experience that managed to seamlessly unite professional climbing with filmmaking. With Showtime acquiring the doc’s television rights and Music Box Films theatrically distributing the project, the director is hopeful Meru will provide audiences with a deeper understanding of a world that isn’t necessarily accessible to all, while motivating others to chase their own “Shark’s Fin.”