In Kate Plays Christine, Robert Greene uses a mix of observational documentary and melodrama to investigate the life of a Florida journalist who committed suicide on live television. 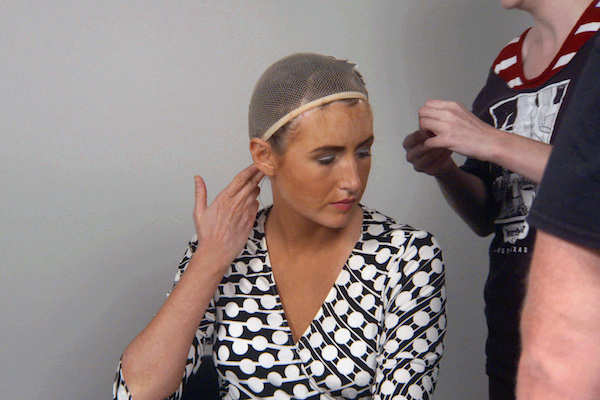 Robert Greene uses the word “terrifying” more than once to describe the process behind his latest documentary, Kate Plays Christine.

The film, which is premiering at the Sundance Film Festival in the U.S. Documentary Competition, looks at the uneventful life and spectacular death of Christine Chubbuck, a news reporter from Sarasota, Florida who shot herself in the head on live television in 1974.

Though largely forgotten, Chubbuck’s story inspired Paddy Chafesky to write the screenplay for the 1976 film Network and is also the basis for a narrative drama that also happens to be screening at this year’s Sundance, Antonio Campos’ Christine.

“We were finding something as we went. It’s a very terrifying thing,” Greene tells realscreen in a phone interview ahead of Sundance. “As a documentary filmmaker, I think in terms of collecting material and that’s not how many of the scenes worked. It was out of my wheelhouse in an exciting way.”

Rather than direct a traditional documentary about Chubbuck’s life using archival footage and talking-head interviews, Greene attempted to understand her suicide by asking actor Kate Lyn Sheil (House of Cards) to star in a movie-within-a-movie and then observed her as she prepared for the role.

Greene and DP Sean Price Williams followed Sheil as she researched old news articles, met with Chubbuck’s former colleagues and transformed her physical appearance. As the film incorporates more dramatized and semi-staged scenes, its atmosphere grows increasingly unhinged. Gradually, moral and ethical questions arise from within the “strange, tense energy” – as Greene put it in his director’s statement – created through this process.

“A film about Christine Chubbuck is something I’ve been trying to do for 10 years, but I never could wrap my head around making a straight-forward version of the film,” says Greene. “It’s just something I didn’t want to do. I didn’t want to make a movie about a depressed woman who kills herself.”

While Greene had been mulling over a movie about Christine Chubbuck for years, the idea always felt problematic. In particular, he was intrigued by one detail: that she wrote out a script about her attempted suicide to be read on the air as a news item.

“Christine Chubbuck’s story, in a way, is cliché ridden,” he explains. “She’s depressed. She’s lonely. She’s having issues with her job. The deeper you dig, the less adequate the answers seem to be about why she might do that. And then you realize, why am I even trying to figure out why she did it? Why am I obsessed with this story?”

Greene is the filmmaker-in-chief at the Murray Center for Documentary Journalism at the University of Missouri and he writes about docs for Sight and Sound. He also works in the world of scripted cinema as an editor, but his own artistic concerns exist between the two worlds. His documentaries Kati With An I, Fake It So Real and Actress question notions of authenticity in non-fiction cinema by examining what he calls “documentary performance.”

After grappling with the idea for years, he decided to approach Kate Plays Christine similarly to his previous film, Actress, for which he followed a mid-career actor, Brandy Burre, in both observational and semi-staged scenes.

In 2014, he approached Sheil – whom he has known since they worked together at the now-shuttered East Village store Kim’s Video & Music – and pitched the idea for Kate Plays Christine.

“She’s one of the most thoughtful people I’ve ever met,” says Greene. “I knew she would dive in with the most sincerity, seriousness and respect for representing Christine Chubbuck.”

Sheil bought in, but the idea was tougher to sell to financiers. Although he received many encouraging words during meetings at festivals and at pitching forums, commissioners and other backers from the traditional documentary sector declined to sign on. Greene knew raising money would be tough, but he believes doc financers are not keeping apace with audience interests and sees Sundance’s recently announced Art of Non-Fiction initiative as a “corrective to that.”

“Look, aesthetically risk-taking work is never going to be easy to fund, but what’s happened in the last decade is we’ve consistently seen at film festivals and in theatrical releases that the best, most interesting films are artful non-fiction,” he says. “When you see the Sundance Institute get that heavily supportive of an idea, then perhaps other people will jump in and say we need to be supporting more work like that.”

The shoot took place over three weeks last July around the 41st anniversary of Chubbuck’s death. Although he had a built-in structure for the doc, he describes the process as an exploratory one that required a lot of trust between himself, Williams and Sheil akin to “linking arms and jumping into a pool.”

Greene and Williams have collaborated on 20 shorts and feature films together, both as director-DP and as DP-editor (Greene edited Ross Perry’s Listen Up Philip and Queen of Earth, both of which were shot by Williams), so much of their working relationship is unspoken.

“He adds a perspective in the way he films images that give us a chance to look through them, past them and in between them,” he says of Williams. “We’re absolutely trusting of each other. He also knows that whatever he’s getting, I, as the editor, will see it.”

The staged scenes of Sheil and a local cast acting out Chubbuck’s final days are intentionally styled as under-cooked melodrama. He directed Sheil to take the performance seriously, but to fail in order to draw out his own moral and ethical issues around telling the story.

“It’s very strange to direct something that is meant to be a failure,” says Greene. “Whereas a lot of documentaries would take a re-enactment and make it as poetic and escapist as possible, our scenes were meant to be anti-escapist. That was very, very terrifying.”

Although Antonio Campos’ Christine takes a narrative approach to the same subject, Greene insists the only filmmaker he is questioning is himself.

“The last thing I would ever do is say someone should make a certain kind of movie,” he says. “That’s against everything I believe in terms of freedom of artistic expression.”

It’s odd that such a sensational story should be overlooked for decades only to become the subject of two films having world premieres at the same festival.

“A fascinating thing that reverberates from the ’70s to now is what we think of as images, of watching something and what it means to view something as horrible as this,” he muses, adding that the lack of footage has likely kept the story off the media’s radar all these years.

“Christine Chubbuck did what she did in order to be seen and because it happened in a different era, this thing that was meant to be seen was never seen,” he says. “It’s ironic that 42 years later she is being seen. That’s just remarkable. I don’t know if that’s good or bad, but it’s remarkable.”

Kate Plays Christine screens during Sundance tonight (January 24) at 9 p.m. at the Temple Theatre in Park City, Utah and again on January 26, 27, 28 and 29. Visit the festival’s website for complete screening info.